The Marshall Islands are a small group located just north of the equator in the central Pacific.  Most Americans had never heard of the group until late February 1944 when the 22d marine regiment and the 196th Infantry Regiment won the atoll from the Japanese in a bloody five-day battle. In the aftermath of the battle, the small string of islands and coral reefs lay littered with the debris of battle.  Bombs and bullets, bodies and wreckage competed with sand and coral for space. A few years later Eniwetok was again the scene of violence of a new and terrible sort.  The hell of atomic tests ripped and gouged at the coral and deadly radiation and heat decimated the life on many of the islands and in much of the lagoon.

(Here is an account by a veteran of that testing) 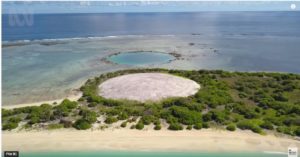 (and here is a video about a condition we knew nothing about at the time.  We dove once in the crater on a recreation dive.  A few years later they covered that crater.  Now it’s leaking: Leaking Toxic Time-Bomb) 1970 image:

With the ban on Nuclear tests, the lagoon was converted into a target area for the air force. Now strategic missiles are hurled into the blue waters in order to measure their accuracy and effectiveness.

Millions of years ago the mountain which is the present foundation of Eniwetok thrust its enormous bulk up through the dark Pacific depths to feel the light of day.  In the warm shallow waters on the shoulders of this mountain small coral colonies began their eons-long job of building the atoll that now consists of a string of islands forming a roughly circular atoll some 60 miles in diameter.   The name, Eniwetok, applies to this atoll, but also to the only inhabited island of the atoll.  It is tiny by most standards being 2 1/2 miles long, 100 yards wide and about 11 feet high at high tide.

During the Second World War Eniwetok was the scene of a bloody battle with the Japanese, then subsequently it was used for Atom Bomb testing.  Presently it is part of the Pacific missle range nominally maintained by the Air Force.

The islands ringing the atoll are ugly and barren for the most part. The larger ones are covered with rotting buildings rusty equipment, and only sparse, ragged vegetation.  Rusting hulks, concrete bunkers, and an incredible litter of cables and wires foul many of the beaches.  The outer reef which protects the placid waters of the lagoon from the trade wind-driven waves that lash at its coral 12 months of the year 24 hours a day is, however, clean, but inhospitable to man.

The lagoon is another matter.  To be sure the bottom is in many places littered with the ugly debris of man’s passing, but here in the warm quiet bosom of a sunken mountain of coral, the quiet builders of the Pacific are at work covering and erasing the clutter.

A three-inch power cable used at one time to link two islands now has its black skin covered by basketball-sized balls of coral and brilliantly colored gorgonian fans have fastened to discarded wing tanks to disguise their functional ugliness.  A jeep lying in 60 feet of water discarded fifteen years ago is now a coral encrusted home for myriad colorful sea creatures. Left alone this tropical microcosm beneath the surface of the sea will forget man’s passing very quickly.

Already only twenty years after the life of parts of the lagoon were virtually eliminated by the hell of atomic fire and radiation the waters are teeming with an incredible abundance of tropical sea life.

In the center of this fantastic atoll is where my job lies.  In 200 feet of water, the fresh remains of a spaceship rests, a re-entry vehicle in military jargon, flung there as the latest in a series of military experiments designed to improve our “deterrent” weapons.

On the deck of the recovery boat, it is hot.  The sun is almost directly overhead and the steel deck plates of the converted navy landing craft are steaming where wetted by an occasional wave that splashes over the gunnels.  The wide, flat main deck holds a clutter of equipment now temporarily ignored by the diving crew who are manning the three anchor winches used to position the boat directly over the missile remains, as those with sighting equipment onshore direct the boat crew by radio. The boat slowly wallows into position.

Finally, the winch brakes are set and the winch engines shut down.  The only machine noise now is the low rumbling below decks of the auxiliary generator supplying power to ventilation fans lights and galley equipment.

Now as the boat operator and his one-man crew relax with a cup of coffee and a sandwich, the diving crew prepares for their part of the operation.  The huge cylinder of the recompression chamber has been carefully checked and tested during the trip to location.  Now its valves are checked again so that in case of emergency an injured diver can be quickly placed in it for treatment. The pressure in each man’s set of scuba bottles is checked by the man who will depend on them. Regulators are attached and checked.

“OK, Clint, you and Ron are the first pair.  Cobb and Jack are standby, and Bozo’s got surface safety swimmer.”

We quickly don our equipment.  The standby divers take their place near the edge of the deck where they can quickly come to our aid if trouble develops below.  The surface swimmer with only mask and fins enters the water checks quickly and reports all clear meaning no big “manacheetas” (sharks) in the area.  His job will be to keep an eye on our location by watching our bubbles and to report what he can to the diving supervisor or timekeeper.  Manny, the crane operator, lowers the concrete weight or “clump” to the bottom 200 feet below.  In order not to get lost we will descend this line and once on the bottom attach a light cord to the concrete weight. All is ready.

My diving partner, Ron, and I step to the edge of the deck. We have instructions to locate the missile, note range and bearing from the concrete “clump” and return.  We have a maximum of ten minutes before we must ascend. At 200+ feet our air will last no longer. Ron and I check our watches, take a quick breath from our scuba, nod at each other and jump simultaneously into the water three feet below deck level.

The momentum of my jump carries me several feet down below the surface.  The water is cool after the heat of topside. Seconds later the cloud of bubbles that accompanies me from the surface clears, and I look around for orientation and to locate Ron.  Our eyes meet and he gives me the thumbs down “let’s dive” signal and kicks down along the descending line.  This close to the boat the throb of the auxiliary generator pounds like a drum.  It dims in my senses as I follow Ron down and now there is only the intermittent rush of bubbles from my regulator and the susurrus of sea life.  My ears also pick up the whistling of Ron’s equipment as he breathes.  Even when we are not looking at each other we are aware of this sound from each other.  At 200 feet an equipment failure means that we both must share one set of air tanks as it is too far to swim safely to the surface without air.

Now we are about halfway down.  Looking back I can see the boat looking tiny with the insect-sized figure of the surface swimmer.  Below, the shadow shapes of sand and small coral heads are becoming visible in the blue gloom.  Ron looks over his shoulder checking to see if I have had to stop to equalize the pressure in my ears. I give him the “OK” sign and we continue our descent.  The concrete clump is dimly visible below.

About twenty feet from the bottom we stop. From here we can see to the limit of water visibility without our sight being obstructed.  We attach a ‘circle line’ to the clump and stretch it out. I take my position at the end of the line and Ron at the half-way point. We begin to swim in a circle to search for the missile. As I swim I see a strange shape in the sand below–a portrait of the head of Lenin.  I know the hallucination is the result of narcosis, an effect of the high pressure of nitrogen at this depth, and I fully expect the picture to dissolve into small rocks and plants as I pass its location.  Yet to my fascination as I pass over it about ten feet above, it does not dissolve and, in fact, Lenin winks at me in a most solemn manner.  The effect is quite sobering.  At two hundred feet a diver wants to have his wits about him at all times and this is startling evidence of my befuddlement.

To reduce the narcosis I signal Ron that I want to change positions with him, as swimming the smaller 50-foot radius circle should reduce my effort and consequently the effects of narcosis. As we change position I notice a small shark curiously following behind Ron. A small rag is affixed to the circle line at the halfway point. As Ron leaves the marker the shark eases up to it and takes it in its mouth as though tasting it and then he discards it.  I don’t know what attracted it in the first place.  The cloth, which was red at the surface, at this depth appears jet black due to the filtering action of the water on sunlight. Since I am wearing a bright red swimsuit I must admit that my attention is as much behind me as ahead of me as we continue the circle.

About three-quarters of the way around the circle we spot the missile resting on its heat-shield nose in the sand. We measure its distance against the circle line and take a compass bearing from the clump to it.

Our time nearly expired we ascend planning gleefully to tell the next pair of divers of the monster shark that waits for them below.

Here’s a photo from those days on Eniwetok.  I’m adding the names so that at some future date when the names are ‘Googled’ the page will come up–hopefully!.